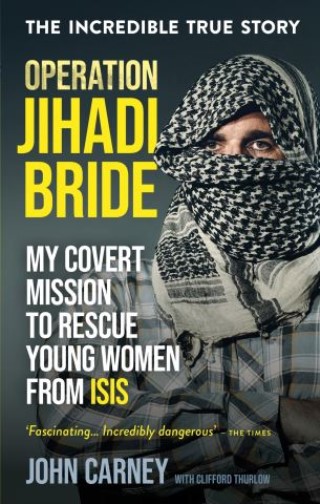 Soldier Magazine's Book of the Month

Gripping. Adrenalin fuelled true-life account with all the makings of a military thriller. The action unfolds like a Le Carre novel. Soldier Magazine</h2>

'If there are young women with children trapped in that hell and we can get them out, don't we have a duty to do so?'

Hearing terrifying stories first-hand from naive young girls who'd been tricked, abused and enslaved by ISIS, ex-British Army soldier John Carney set up a high-risk operation to rescue as many as he could.

This is the breath-taking true story of how he repeatedly led his men behind enemy lines into the Syrian lead storm to liberate women and children, delivering them to de-radicalization programmes and fair trials.

Believing that 'every person we can bring back is living proof that ISIS is a failure', Carney tackles the complex issue of Jihadi Brides head on, as he and his men endanger their lives, not always returning safely home.